Last week I attended Premier David Makhura’s State of the Province Address, which was delivered at the Sefako Makgatho Health Sciences University in Ga-Rankuwa.

The speech is one of the best I have heard and the obvious passion in his tone made it clearly evident that he would deliver on his plans. He outlined the successes, challenges, opportunities and risks that face our province and unveiled a plan of action to galvanise the energy and creativities of all sectors of the population to take specific actions towards the Gauteng of our dreams. He also made it clear that the first and foremost goal is to grow the economy in order to massively increase the number of new jobs, while sustaining existing jobs in Gauteng.

He identified seven priorities and specific interventions in strategic sectors and corridors to achieve optimal outcomes during the decade, which are:

In this piece, I will focus on the Economy, Jobs and Infrastructure.

According to the Premier, Gauteng will achieve its jobs target by focusing on these high growth sectors:

The province will improve the ease of doing business in each sector, develop a skilled workforce for each industry and build an enabling infrastructure, including special economic zones (SEZ’s) and industrial parks.

By 2025, the Gauteng City region will have three fully operating SEZ’s in Ekurhuleni, Tshwane and Sedibeng and a special agro-processing zone on the West Rand. In addition, there will be 15 revitalised industrial parks, 12 agri-parks and five agro-processing facilities across the five corridors. This will be a single industrial ecosystem that supports the ten high growth sectors and township SMMEs.

By 2030, Gauteng will have the biggest inland logistics hub and dry port in Africa – the Transnet Tambo-Springs Logistics Gateway. This will give the province a major competitive advantage on the continent.

Globally competitive infrastructure and logistics capabilities will also unleash the potential of the ten high growth sectors, create massive job opportunities and facilitate the entry of new SMMEs, township businesses and black industrialists into the mainstream of our economy.

In the next five years, the Gauteng provincial government will spend R60bn on building and maintaining infrastructure, which will contribute to the creation of an additional 100 000 jobs and facilitate the development of 50 black industrialists. The province will upscale its welfare to work programmes that will enable 100 000 unemployed women (who currently depend on state grants), to advance to self-employment in the township economy.

Using the lever of the public procurement policy decisively to promote youth employment, women empowerment and the growth of black business and township based enterprises, the province will set up its empowerment programmes by:

The Premier also stated that materials for building houses, schools, hospitals, clinics, roads and government buildings must be sourced from local companies. Installations, repairs and maintenance on public facilities will be done by artisans from townships.

This year, the province will introduce the Township Economic Development Bill, which will nullify all bylaws that inhibit, frustrate and suppress the operations of SMMEs and informal businesses in the province. The new law will create conditions for SMMEs and township businesses to create wealth and employment as they grow and prosper.

Another important goal in the Premier’s plan to grow the economy is to increase Gauteng’s exports and trade within the continent. The ten identified high growth sectors will produce manufactured goods and services that must be destined for the entire Africa Continental Free Trade Area.

Through the Gauteng Growth and Development Agency, the province will increase its exports to the continent by 15% by 2025. In 2030, intra-Africa trade should contribute to the creation and maintenance of 150 000 jobs, up from the current 50 000 jobs. It also intends to increase exports to major regions of the world by 10% by 2025.

Finally, the province will continue to drive aggressive investment agendas to unlock major corridors and economic nodes across the five development corridors of the Gauteng City region.

After the Premier’s address, I truly felt re-energized, reignited, hopeful and ready to go, especially under the current economic clouds of uncertainty.

I believe that the Premier and his strong and committed team will walk the talk towards achieving the ambitious goal of Growing Gauteng Together. I wish them all the best and I am excited to note the significant inclusion of startups and SMME’s in the Premier’s masterplan, may they too benefit from these prospects.

Kizito Okechukwu is the co-Chair of the Global Entrepreneurship Network (GEN) Africa – 22 on Sloane is Africa’s largest startup campus.

Our Society Mirrors The Dichotomy Between The Haves & Have-nots

The United Nations list of the least developed countries contains about 47 nations that comprise some 900 million people – and these countries are riddled with urban slums, which are hotspots for the coronavirus to thrive.

Corona: The Invisible Enemy That is Changing Our Lives

In my early school years, I studied Latin and I bagged a credit on my last diploma exam. 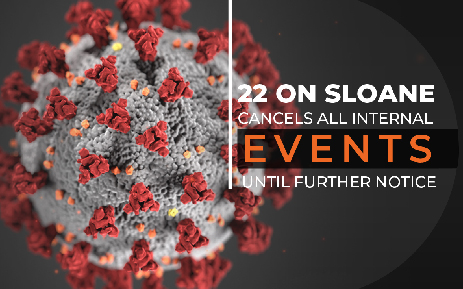 22 ON SLOANE CANCELS ALL INTERNAL EVENTS UNTIL FURTHER NOTICE

It is with great regret that we have decided to postpone our monthly events during March and April (Startup Huddle, Master classes and 22 On Sloane’s intra networking session). After much consideration, we felt that protecting our community is a priority and it is important that we apply universal and aggressive public measures to slow the spread of COVD19. For our pitching sessions, you have an option of doing it virtually and communications will be made.